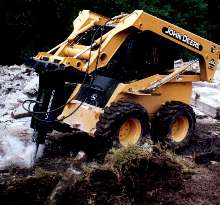 Loegering Hammers into the Demolition Market

Casselton, North Dakota - Loegering is proud to announce it's newest skid-steer attachment. Loegering's breakers are more powerful and lighter than other similar class breakers. Loegering Director of Sales and Marketing, Del Carver states "the key benefit of our breaker is that the Loegering breaker will be more powerful with less weight. In most cases, you would have to go up one size or class to get the same performance, which would mean spending more money to get the same result." The Loegering breaker models range in weight from 430 pounds to 1,100 pounds.

The unique patented valve system uses less oil flow to do the same job as a higher flow breaker. Fewer components on the Loegering breaker means less maintenance for the end user. Because this is such a low maintenance attachment, it's also very cost effective.

Loegering, the original skid-steer track manufacturer, has been building tracks for over 30 years and tracking self-propelled booms since 1977. The company designs and produces tracks and attachments for distribution worldwide.