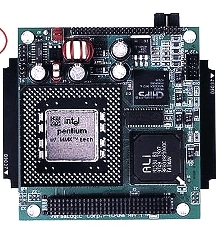 Eugene, OR - VersaLogic Corp. announces the release of its popular Panther PC/104-Plus Single Board Computer in two new versions based on the low power Intel® Pentium® processor. The fanless 266 MHz version boasts no moving parts, 0° to 60° C operation, and draws a full 24% less power than the AMD K6 equivalent. The extended temperature version supports full -20° to +85° C operation at 266 MHz. This announcement follows the recent release of a similar upgrade to VersaLogic's EBX single Board Computer, the VSBC-6.

"We are pleased to use Intel processors because of their demonstrated long-term commitment to the embedded market." said VersaLogic's vice president of sales, Tom Barnum.

The Panther has proven popular in a variety of industries from
military, medical, and semiconductor industries, particularly for
applications that require long-term availability and reliability.

This board is currently available from stock. Pricing for the Panther with fanless CPU is $1002 in OEM quantities. For additional information contact VersaLogic Corp. at (541) 485-8575 or info@versalogic.com, or visit their on-line catalog at www.versalogic.com.