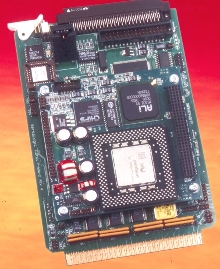 Eugene, OR-VersaLogic Corp. has announced the release of a new STD 32 Single Board Computer based on the low power Intel(R) Pentium(R) processor. The board is an addition to the popular VL-686-2 family. The fanless 266 MHz version boasts no moving parts, 0 deg to 60 deg C operation, and draws a full 16% less power than the AMD K6 equivalent. This version also features an upgrade to 4 MB video RAM. This announcement follows the recent release of similar upgrades to VersaLogic's EBX and PC/104-Plus Single Board Computers, the VSBC-6 and Panther.

"STD is an important part of our product line," said VersaLogic's vice president of sales, Tom Barnum. "We are pleased to offer this new Pentium version of this board. We use Intel processors because of their demonstrated long-term commitment to the embedded market."

The VL-686-2 models have proven popular in a variety of industries including military, medical, and semiconductor, particularly for applications that require extensive expandability, multiprocessing capability, or low mean time to repair.

The new board is currently available from stock. Pricing for the VL-686-2s with fanless CPU is $1352 in OEM quantities. For additional information contact VersaLogic Corp. at (800) 824-3163 or info@versalogic.com, or visit their on-line catalog at www.versalogic.com.