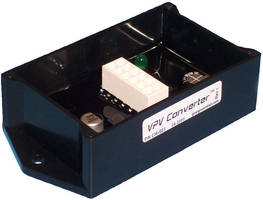 
Duluth, GA - Georgia Controls announces the public release of a dual purpose signal converter for HVAC OEMs. Known as the VPV Converter, this device can be used to interface different types of HVAC control systems and variable speed fans which were previously incompatible.

"Sometimes you have to connect two things together that were not intended to work together. That's where Georgia Controls comes in. There was a need in industry to connect fan 'A' to controller 'B' and sometimes fan 'B' to controller 'A'. We created one product that allows the OEM (or the installer in some cases) to connect A to B or B to A. It's really that simple," said company president Ian Albritton in a recent interview.

PWM and voltage outputs are created automatically without setups. With the controller's output connected to the VPV Converter input, the installer can use either the PWM or voltage output to drive the fan motor.

Analog and digital filters are used by the VPV Converter to reject electrical line and system noise. This allows it to respond only to the actual input signal and ignore electrical transients caused by motor brushes, contactor arcing, and other noise sources commonly found in HVAC systems.

The VPV Converter is powered by 24 VAC. Variable voltage inputs and outputs range from 0 - 10 VDC. PWM inputs and outputs are rated for 12 VDC. There is also a "G" output for ECMs that require this signal. There are three LEDs on board to indicate the converter's status.

The VPV Converter, part number 236-803, is in production and available to OEMs. To ensure quality, they are manufactured and tested in the USA. VPV Converters are marketed under the name Georgia Controls, which is a trademark of Creative Connections, Inc. Creative Connections was founded in 1986 and is an engineering and electronics manufacturing company located in Duluth, Georgia, USA.

Learn about other capabilities of the VPV Converters at:
http://www.georgiacontrols.com/vpvconverter.htm