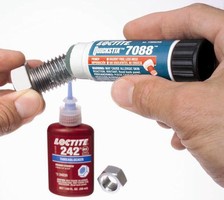 LoctiteÂ® QuickStix(TM) 7088(TM) Primer enhances performance and accelerates cure of anaerobic machinery adhesives used in threadlocking, thread sealing, gasketing, and retaining applications. Featuring environmentally friendly formulation free of solvents and VOCs, product is recommended for use on plated, anodized, and galvanized parts as well as inactive metals. It may also be used on cold metals and assemblies that feature large gaps or deep threads.


Rocky Hill, Conn. - It's neat. It's clean. It's fast. And it couldn't be easier to carry or apply. New Loctite(R) QuickStix(TM) 7088(TM) Primer is the first semisolid primer available to enhance the performance and speed the cure of anaerobic machinery adhesives used in threadlocking, thread sealing, gasketing, and retaining applications. This semisolid primer actually is more effective than liquid primers in speeding adhesive cure.

Loctite(R) QuickStix(TM) 7088(TM) Primer is recommended for use on plated, anodized and galvanized parts, and inactive metals such as titanium, zinc, aluminum and others. It is especially effective on cold metals and challenging assemblies that feature large gaps or deep threads.

The new environmentally-friendly primer is solvent free and VOC compliant, and exhibits reduced odor and decreased flammability over liquid primers. The pocket-sized 17-gram self-feeding stick applicator will never spill and is ideal for use on overhead or hard-to-reach applications. Patented worldwide and available only from Henkel Corporation, this is the first anaerobic primer in a semisolid form.

For more than 130 years, Henkel has been a leader with brands and technologies that make people's lives easier, better, and more beautiful. Henkel operates in three business areas -- Home Care, Personal Care, and Adhesives Technologies -- and ranks among the Fortune Global 500 companies. In fiscal 2007, Henkel generated sales of $19.218 billion and operating profit of $1.975 billion. Our 53,000 employees worldwide are dedicated to fulfilling our corporate claim, "A Brand like a Friend," and ensuring that people in more than 125 countries can trust in brands and technologies from Henkel.
Share