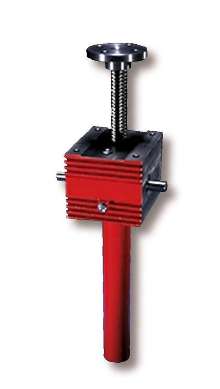 The higher duty rating has been attained by improving the design of the jacks worm gearbox. Conventionally the duty cycle performance is varied by changing the lifting screw from a machine screw (typically 30-50% efficient) to a ball screw (typically 90% efficient). As the worm gear set had only small areas for efficiency improvements the main area for design improvements was in the thermal efficiency of the gearbox housing. The limiting factor for the gearbox is the lubricants maximum temperature for optimum performance. This is typically 900C to 1000C for a standard lubricant, which is grease in most worm gear screw jacks.

Higher thermal efficiency of the gearbox is achieved by:-

a) Increased surface area with cubic shape and finned sections allows better heat dissipation of the heat built up in the gearbox.

The increases in surface area and mass were all calculated to the optimum point for the available foot print for each screw jack size. This balance of area and mass is critical as both can detrimentally affect the thermal performance. In general, tests showed that the "S-Series" screw jacks had a 50% higher duty cycle than conventional worm gear screw jacks, irrespective of the lifting screw type in the unit.

Other benefits built into the design are improved flexibility for different linear travel rates, mounting arrangements for the screw jack, and accessory attachment mounting.

The cubic gear box housings flexible design allows mounting access from two sides to position the screw jack at any angle, this eliminates the need for the conventional upright and inverted screw jack variants. This reduces both Power Jacks and the customers' product variants in stock and in service.

To satisfy more applications with standard product there is the choice of 3 standard gear ratios with two different lifting screw leads, covering a multitude of linear travel rates, in translating (ST) or rotating (SR) screw form.

As with all screw jacks from Power Jacks the "S-Series" can be driven individually, with a range of standard motor adapters bolted direct to the gearbox housing, or in multiple jack arrangements using standard power transmission solutions from Power Jacks.
Share