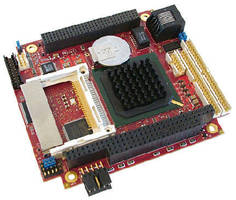 This high-reliability fanless design is available in both standard (0° to +60°C) and extended (-40° to +85°C) temperature versions. The low power consumption, compact design, and soldered-on RAM make the Manx an ideal choice for demanding embedded computing applications in markets including defense, aerospace, medical equipment, and industrial automation.

Len Crane, President of VersaLogic, noted, "The Manx provides a great migration path for existing customers, or an opportunity for new customers to realize the benefits of a moderately priced x86 CPU board with very low power draw."

As with other VersaLogic embedded computer boards, the Manx features a Phoenix Software (formerly General Software) reprogrammable BIOS which supports custom defaults and the addition of firmbase security applications, remote booting, and other pre-OS software functions.

The Manx is fully RoHS-compliant and compatible with a variety of popular embedded operating systems, including Windows CE/XP, Linux, VxWorks, and QNX.

The Manx will be available in production quantities in June. Pricing is about $550 in OEM quantities. For additional information contact VersaLogic Corp. at (541) 485-8575 or info@versalogic.com, or visit the on-line catalog at www.VersaLogic.com.

About VersaLogic Corporation
A leading supplier of industrial computers since 1976, VersaLogic focuses on high-quality board-level products for embedded OEM applications. Its five year product availability guarantee and outstanding warranties demonstrate a commitment to service. Product platforms include EBX, PC/104, PC/104-Plus, EPIC, SUMIT, and SPX(TM). VersaLogic has received the coveted Platinum level vendor rating from VDC Research Group, Inc., for five consecutive years. VersaLogic is ISO 9001:2008 certified and was one of the first companies in North America to be registered to the 2008 standard. For more information, visit www.VersaLogic.com.
Share