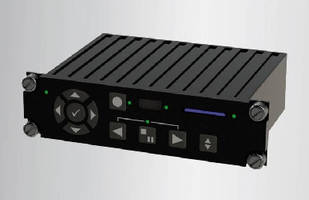 The VRDV7000 supports simultaneous recording and playback, enabling surveillance teams to view uninterrupted live video sources while reviewing previously captured video in a separate display, or in a single display, such as the Curtiss-Wright 10.4” AVDU2600 LCD touchscreen display, that supports picture-in-picture or picture-by-picture viewing. The VRDV7000’s support for precise metadata is ideal for capturing live video and combining it with critical situational data such as camera, date/time, and GPS information. For airborne surveillance crews that need accurate evidence, and for Search & Rescue (SAR) teams that need pinpoint location accuracy, the VRDV7000 delivers a compact, reliable solution.

The VRDV7000’s dual channels reduce size, weight, power and cost (SWaP-C) by effectively eliminating the need for a separate recording unit in order to simultaneously view/review video. Compared with single channel solutions, the unit’s multi-channel capability provides the advantage of significant weight reduction. The unit speeds and simplifies the integration of high performance HD video recording into SWaP-C- constrained airborne and ground military, paramilitary, and SAR platforms. To maximize interoperability and ease technology upgrades, the VRDV7000 supports the functionality of each of its predecessors while adding significant new functionality.

The VRDV7000 uses the widely supported MPEG-4 standard to record the highest quality video at a bit rate that enables many hours of recorded video to be stored on a secure, removable digital (SD) card or USB memory stick, with support for up to 512GB of data storage. The use of MPEG-4 Part 10 (Advanced Video Coding)/H.264 video compression technology guarantees both optimum recording quality and best use of storage media. The unit supports the HD-SDI digital video standard with two (2) SD-SDI/HD-SDI video inputs and two (2) video outputs. Each input supports video resolutions up to 1080p30/1080i60. Metadata, supplied as HD-SDI ancillary data payload, is recorded together with the video signal.  Up to two (2) channels of VGA/RGB analog video (sync on green or separate syncs) may also be connected to the recorder, with support for video to common VESA standards and STANAG 3350B/C. Two (2) channels of standard definition video (either single-wire CVBS or S-Video) supporting PAL and NTSC are also provided. These six (6) video inputs may be flexibly used in different combinations; for example, as two HD channels (whether from HD-SDI or RGB), or as one HD channel and one SD channel.

The VRDV7000 video recorder is designed for optimum operation with Curtiss-Wright's family of rugged video displays and video management systems (VMS). It supports the CANbus-based serial control protocol common to all Curtiss-Wright video management products. The control protocol enables operators to use the display’s bezel buttons or on-screen soft buttons to control the operation of one or more video recorders without needing to use the recorder’s front panel. Touchscreen-based control increases the operator’s ability to remain focused on the mission at hand.

In addition to the built-in storage provided by its SD and USB slots, the VRDV7000 can also connect to network-attached storage (NAS) devices via its Ethernet interface. This enables the use of products such as Curtiss-Wright’s Data Transport System (DTS) which provides ~1TB of removable storage on solid-state drives. VRDV7000 can also transmit encoded video streams to equipment connected to its Gigabit Ethernet interface using the RTP protocol.

NOTE: Trademarks are property of their respective owners