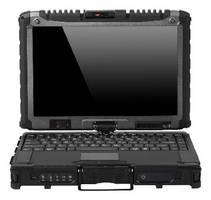 
POWERED BY AN INTEL CORE i7 2.0 GHZ PROCESSOR

IRVINE, CA. -- Getac, a leading innovator and manufacturer of rugged computers that meet the demands of field-based applications, is introducing its new V200 rugged convertible, the world's most powerful fully rugged convertible notebook*. The V200 also offers more features and functions than previous models, making it one of the most useful all-purpose rugged convertibles on the market.

The V200 is powered by the advanced Intel Core i7-620LM processor running at 2.0GHz, MAX 2.8GHz with Intel Turbo Boost Technology, the most powerful processor available in a fully rugged convertible notebook to date. The 4MB of Intel L3 Smart Cache is readily available to each of the processor cores, improving efficiency while increasing processor speed. At only 25-watts consumption, the Core i7-620LM helps the V200 outperform other rugged convertibles by up to 47 percent.

Perfectly suited for vehicle mounting or field use, the notebook-to-tablet V200 convertible features a 12.1-inch wide screen display and comes standard with Getac's exclusive 1200 NITs QuadraClear(TM) technology, enabling users to easily read and operate their computer under direct sunlight. In addition, the display offers a resistive multi-touch capability enabling workers to manipulate the screen by a series of single and multi-finger gestures even while wearing gloves-a necessity when working in extreme weather conditions or dangerous environments.

"The new V200 is the most powerful and feature rich fully rugged convertible available," explains Jim Rimay, president, Getac. "Its rugged design, fast processor and extensive features and functions make it the most useful, all-purpose tool for field-based applications in the industry."

Weighing under 6 pounds, the V200 is MIL-STD-810G and IP65 compliant, adding to its rugged design and flawless performance in harsh environments. Along with its full magnesium alloy casing, the fully-rugged convertible comes standard with low-temperature operation allowing the computer to be used in -20C environments. The V200 also includes a shock mounted 320GB hard drive and sealed I/O caps and doors to prevent damage from solid particles and moisture. Users can also configure the V200 with an 80GB solid state drive.

A groundbreaking new option on the V200 is Getac's innovative LifeSupport(TM) battery swapping system. The LifeSupport(TM) battery swapping system allows field users to quickly change out a depleted battery with a fresh charged one. By entering standby mode, the user has approximately two minutes to replace the battery without shutting the computer down or closing applications.

By combining the company's signature magnesium alloy casing with a super-fast processor, advanced design and other critical features and functions essential to field work, Getac has produced one of the most effective time-management tools available in the field.

As with all of Getac's fully rugged notebook, tablet and convertible computers, the V200 is backed by the industry's best 5-year bumper-to-bumper warranty. Enjoy the peace of mind that comes with knowing that the V200 is covered by a warranty that includes damage that occurs due to accidental acts and environmental exposure. The new V200 is will be available at the beginning of October through Getac Authorized Dealers.

* Testing conducted by Getac in July 2010. Performance tests are conducted using specific computer systems and reflect the approximate performance of the V200 versus competitive computers current at the time of testing.

© 2010 Getac Inc. All rights reserved. Getac and the Getac logo are either registered trademarks or trademarks of Getac Technology Corporation in the United States and/or other countries.

All other brands and product names are trademarks or registered trademarks of their respective companies.
Share