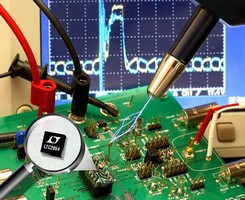 Suited for operation in systems with 3.3 V supplies, LTC2854/LTC2855 are RS485 transceivers with switchable, integrated termination, while LTC2850/LTC2851/LTC2852 offer industry standard pinouts and support maximum data rate of 20 Mbps. Enhanced ESD protection allows interface pins of LTC2854 to withstand up to Â±25 kV (Human Body Model) without latchup or damage, other devices withstand up to Â±15 kV. All receivers have 1/8 unit load, supporting up to 256 devices on bus.


MILPITAS, CA - February 28, 2007 - Linear Technology Corporation introduces two new families of RS485 transceivers for operation in systems with 3.3V supplies. The LTC2854/LTC2855 are RS485 transceivers with switchable, integrated termination, while the LTC2850/LTC2851/LTC2852 offer industry standard pinouts and support a maximum data rate of 20Mbps. Enhanced ESD protection allows the interface pins of the LTC2854 to withstand up to ±25kV (Human Body Model) without latchup or damage and up to ±15kV for the other parts in the families, making them ideal for rugged industrial and automotive applications.

All receivers have a one-eighth unit load, supporting up to 256 devices on the bus, while all drivers maintain high output impedance over the entire common mode range when disabled or when the supply is removed. Excessive power dissipation caused by bus contention or a fault is prevented by current limiting on all outputs and by thermal shutdown.

The LTC2854/LTC2855 complement the existing LTC2859/LTC2861 RS485 transceivers which operate from 5V supplies. RS485 networks require 120 Ohm termination resistors to be installed by the end user based on the physical layout of the twisted-pair wires and the placement of the nodes. If the bus is extended or reconfigured, the termination must be changed again by the end user. This new family of transceivers allows the proper nodes to be terminated without the end user's physical intervention by switching the integrated termination on or off under software control. These features provide more functionality than existing RS485 transceivers, yet reduce the overall solution size by fully integrating the termination resistor and transceiver into a tiny DFN package.