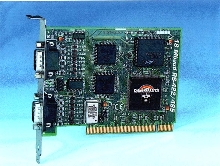 CYB 218MP dual-port PCI RS- 422/485 card can be set for communication rates from 115,000 to 18,000,000 baud. Two ports on each card can be set independently for either full or half-duplex RS-485 operation. Card does not rely on host PC to track transmissions; on-board circuits track beginning and end of all incoming and outgoing messages. Handshaking circuit synchronizes card with each application.

Speeds to 18,000,000 baud make this PCI card the winner of the serial communications race. The only thing it won't do is send data at rates less than 115 kbaud. And there's no risk of lost data; special on-board circuits track the beginning and end of each transmission. Even "instant" responses are recognized and received.

Communication can be a bottleneck for industrial computers used in data-intensive control and instrumentation applications. Now, the CYB 218MP dual-port PCI RS- 422/485 card from CyberResearch, Inc.(r) eliminates that bottleneck with communication rates from 115 thousand to 18 million baud. You can set each of the card's two ports independently for either full or half-duplex RS-485 operation.

Even serial cards much slower than 18 Megabaud have lost data in half-duplex mode because their host computer lags behind the data flow. That's no problem for this card. The CYB 218MP doesn't rely on its host to track incoming and outgoing messages. Instead, a special on-board circuit senses the beginning and end of each transmission so all the data gets through - every time!

Because the CYB 218MP can send and receive data 130 times faster than a standard serial port, it can outrun the ability of some applications to keep pace. A special handshaking circuit synchronizes the card with the application.

Technical Note:
Full-duplex communication is normally used for applications that involve many "talkers" and many "listeners" on a single data circuit. It allows data to flow both to and from the computer, simultaneously.

Half-duplex operation is often preferred over full duplex, because it slashes cabling costs by eliminating the need for one pair of wires. However, half-duplex wiring allows communication in only one direction at a time. That means it is best used when there is only one "talker" and many "listeners" on the data circuit. Theatrical lighting is one good application for half-duplex communication.
Share