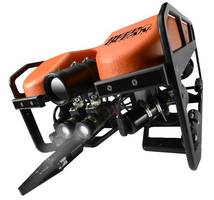 T5 ROV System is suitable for ARIS sonar and is compatible with fiber or copper based telemetry. Unit comes with optional fiber cable which is 600 m and offers 90 mbps of bandwidth. Product is equipped with built-in HD camera and HD video with crisp imaging. T5 ROV System is integrated with DSPL LEDs.

Deep Ocean Engineering introduces a small ROV system for the ARIS sonar, complete with a tilt and roll actuator. While the system is operating, the sonar is being controlled from the topside systems unit.

Deep Ocean’s T5 ROV has the payload to support the ARIS sonar. The sonar is operated underneath the T5 on a purpose-built skid. It includes a built-in HD camera on a tilt as standard equipment. The umbilical includes fiberoptics, providing maximum bandwidth. Deep Ocean’s ROVs have the unique feature of being compatible with either fiber or copper based telemetry. No necessary modifications will be made to the vehicle for users who would like to upgrade to fiber. There is an optional feature in the T5, such as longer fiber cable that is 600 meters and capable of 90 mbps of bandwidth. Deep Ocean is one of the first to configure the sonar onto such a small machine. Currently, the sonar is attached to the T5 with a skid, and is compatible with other systems. The power supply is universal with 120 or 240-volt single phase. It’s also equipped with HD video with crisp imaging and integrated with latest high performing DSPL LEDs.