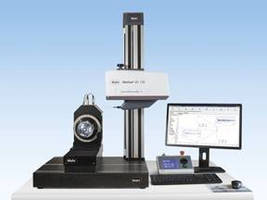 "We call the MarSurf UD 130 an "entry level" system because it is a more economical version of our high-end MarSurf LD 130," said Kevin Akin, Product Manager - Form and Surface Metrology. "It's designed for applications in industries such as automotive or bearings that require high resolution, but which may not have the very high tolerance requirements of some optical or aerospace applications."

With measuring speeds up to 5 mm/second, the UD 130 is not quite as fast as its LD 130 cousin, but is still faster than any competitive model. Likewise, its traveling length of 130 mm, Z- axis measuring range of up to 20 mm, and resolution of 2 nm, exceed specifications for any competitor. Similarly, the UD 130 utilizes an interferometric probe system that provides better technical data than the inductive probe systems of competitive systems. Probe movement is registered by photo diodes and evaluated electronically. This innovative measuring method allows the system to achieve a very high resolution over a large range.

The magnetic mounting system allows probes to be changed by hand in seconds, and provides protection in the event of system collision. A ball stop assembly assures a repeatable probe mounting position, and an embedded electronic chip in the probe arm ensures reliable recognition. Plus, calibration data is saved, so probe changes do not require additional calibration.

The MarSurf UD 130 comes with Mahr's XCR 20 CNC software package for automatic measurement operation. Built on Mahr's modular MarWin platform, it provides extensive surface and contour measurement and evaluation capability, including functions such as line form evaluation, nominal/actual comparison, and the creation of auxiliary reference points. An intuitive, icon-based interface makes the software efficient and easy to use. Both the drive unit and measuring stand axes of the UD 130 can be controlled either by joystick or automated measuring programs. In combination with additional linear and rotary axes integrated with MarWin, fully automated part measurement is easily performed.

Mahr Federal Inc., a member of the Mahr Group, has been providing dimensional measurement solutions to fit customer application needs for over 150 years. The company manufactures and markets a wide variety of dimensional metrology equipment, from simple and easy-to-use handheld gages to technically advanced measurement systems for form, contour, surface finish and length. Mahr Federal is also well known as a producer of custom-designed gages and a provider of calibration and contract measurement services. Mahr Federal's calibration laboratories are accredited to ISO/IEC 17025:2005 NVLAP Lab Code 200605-0 (see our Scope of Accreditation for accredited calibration processes). For more information visit http://www.mahr.com