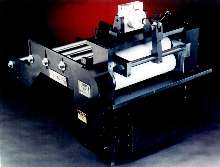 Servo-Driven Roll Feeds include control panel and software that lets users perform press adjustments in 0.0001 in. increments while feed is running. Additional offerings include cut-to-length cycle, kerf-cut cycle, and 14 gag outputs and programmable patterns. Capable of storing up to 200 jobs, products are available from 0.002-0.315 in. thick and come in push, push-pull, or pull configurations. Software includes timed outputs and maximum length feature.

A newly upgraded control panel and software for their line of servo-driven roll feeds that includes the ability to make micro-adjustments "on the fly" is being introduced by Waddington Electronics, Inc. of Cranston, Rhode Island.

Waddington Servo-Driven Roll Feeds have been upgraded to include a new control panel and software that lets users perform precise press adjustments in 0.0001" increments while the feed is running. Other new features include a cut to length cycle which backs material off the cutter to protect the front edge and prevent scraping, a kerf cut cycle to automatically add for slug length, and 14 gag outputs and programmable patterns.

Capable of storing up to 200 jobs, Waddington Servo-Driven Roll Feeds are available for stock from 0.002" to 0.315" thick and come in push, push-pull, or pull configurations. The software includes timed outputs and a maximum length feature which protects against faulty data entry. All feeds are equipped with an RS-232 interface and most have interfaces that allow complete integration with other press control and monitoring functions.

Waddington Servo-Driven Roll Feeds are priced from $9,800. complete. Literature and price quotations are available upon request.