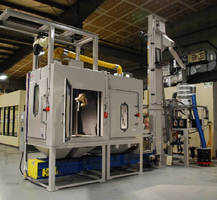 Designed for surface preparation of gas turbine blades and buckets up to 1 m in length, Model RB-10 features 60 x 60 in. finishing chamber with heavily reinforced 60 x 48 in. vestibule at rear to house ABB Robotics IRB-2600 robot, which directs single pressure-blast nozzle. Turntable inside blast enclosure, measuring 24 in. in diameter, is servomotor-driven and controlled as seventh axis of robotic motion to enable precise orientation of work piece during grit-blasting process cycle.


Guyson Corporation has introduced a new version of its RB-10 robotic blast system that is specially adapted for grit blast surface preparation of gas turbine blades and buckets up to one meter in length.

The 60 x 60-inch finishing chamber of the robotic blasting system is designed with a heavily reinforced 60 x 48-inch vestibule at the rear to house an ABB Robotics IRB-2600 robot that directs a single pressure-blast nozzle. A 24-inch diameter turntable inside the blast enclosure is servomotor-driven and controlled as a seventh axis of robotic motion to enable precise orientation of the work piece during the robotic grit-blasting process cycle. To facilitate handling of heavy components, the system is provided with a crane slot and a roof-mounted jib hoist of 500-pound weight capacity.

To meet the customer’s requirement that the surface profile produced by the robotic grit-blasting process be held within a tight tolerance of specific roughness values in preparation for plasma spray deposition of a thermal barrier coating, the media reclamation system was supplied with enhanced features. The transfer of blast media from the finishing enclosure to the reclaimer is accomplished by a mechanical conveyor positioned below the blast enclosure. This type of media conveyor is rarely seen on blasting equipment manufactured in North America, but is more common in Europe.

Used grit is delivered to the base of a bucket elevator with a cascade air wash separator at its top. Once dust and fines are extracted from the blasting grit, it passes through a vibratory screen classifier, and abrasive grain of the specified size is returned to a 10-cubic-foot-capacity pressure pot. An automatic media adder replenishes the grit supply from a storage hopper when electronic sensors detect a low media level.

Custom software was developed by the blast system designer to enable the customer to utilize programming data from existing spray robots to develop robot motion programs for the surface preparation process. Robotic motion programs for dozens of different components are stored and instantly recalled by the ABB robot controller, which is integrated as slave to the system’s Allen-Bradley PLC.  All functions of the robotic blast system other than motion are synchronized by the PLC, including digital sensing of blast pressure, air and media supply, and detection of a full dust drum or classifier scrap drum.

Monitored blast process parameters and the currently selected blasting program, as well as data on any out-of-limit conditions, are displayed on an Allen-Bradley touch screen HMI located beside the front loading door. The graphical interface centralizes all control functions of the robotic blasting system and also prompts the operator when basic maintenance tasks are to be performed, based on the accumulated number of blast hours.

Throughout the programmed blasting cycle, the robotic nozzle manipulator constantly and accurately maintains the correct blast angle, the stand-off distance from nozzle to component surface, the spacing of each pass and the speed of nozzle movement, even as it follows the contours of complex-shaped or asymmetric parts. This precise execution of the prescribed surface preparation routine consistently produces the desired profile with uniform roughness on all areas of the component and from one part to another.