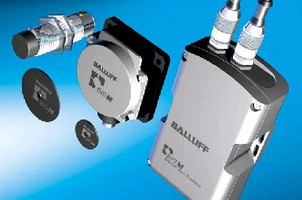 The BIS M system consists of a choice of three read/write heads, including M18 and M30 barrel type, rugged industrial remote processors available in plastic or metal compatible with Interbus, Profibus, DeviceNet, Ethernet/IP or Modbus TCP interfaces, plus the four types of data carriers. To handle continuously moving applications, the BIS M system reads 64 bytes of data in 70 ms at a velocity of 76 m/min and writes 64 bytes in 200 ms at a velocity of 30 m/min.