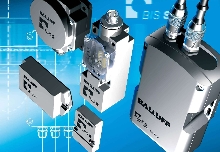 Applications include highly complex assembly operations, such as found in the automotive industry. Products in this and similar industries incorporate multiple production steps and are often made up of many parts and sub assemblies. For fabrication and assembly operations like these, customers must be able to store large amounts of data pertaining to such processes as machining and assembly. Production of these complex components needs large amounts of data transferred and recorded in the shortest possible time in order to reduce cycle time in production.