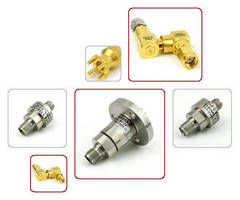 Fairview Microwave’s RF rotary joints are needed wherever RF signals have to be transmitted between stationary and moving parts of a system, commonly used in commercial and military radar, land-mobile-radio communications and anti-missile defense applications. These rotary joints boast a compact design, excellent VSWR, low insertion loss, and minimal variation of RF performance during rotation.  The operating frequency ranges from 0 to 18 GHz depending on the model.

“Fairview’s RF rotary joints are an invaluable accessory for any antenna test range where cables can easily become twisted and damaged due to continual rotation”, says Greg Arnold, Technical Sales Manager at Fairview Microwave. “Our new rotary joints and multi-axis ‘swivels’ can be used to accommodate linear and rotational motion while a system is under test.”

Fairview Microwave’s family of RF rotary joints is available from stock and can ship the same-day ordered. For additional details on the expanded line of rotary joints or company information, please visit http://www.fairviewmicrowave.com/rf-products/rf-rotary-joints.html. Fairview Microwave can be contacted by phone at +1-972-649-6678.