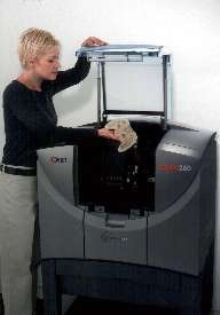 Eden260(TM) photopolymer jetting system fully cures modeling material with UV light during modeling process. Offering resolution of 16 microns, models do not need curing after being built, nor do they require other steps beyond support removal. PolyJet modeling resin comes in sealed cartridges that are safe and clean, so users are not exposed to liquid resin. Operating on 120 Vac, 60Hz, Eden260 features 34 x 29 in. footprint with build envelope of 10 x 9.6 x 7.9 in.

The Eden260 is a high-speed jetting system that fully cures the modeling material with UV light during the modeling process. Models do not need curing after being built, nor do they require other steps beyond support removal, which is done at a standard water-jet station. PolyJet modeling resin comes in sealed cartridges that are safe and clean, so users aren't exposed to liquid resin throughout the process. Models built on the Eden260 have excellent surface finish smoothness and a very high resolution of 16 microns (0.0006 in.). The system is priced at U.S. $99,000.

"Based on the success of the Eden333, Stratasys and Objet decided that the timing was right to offer the Eden260 in North America," says Eden product manager Fred Fischer. "PolyJet technology is setting a new standard in photopolymer rapid prototyping systems. We believe there is a tremendous potential for PolyJet growth in North America in 2005."

The Eden260 is part of the Eden family of PolyJet rapid prototyping systems, and it shares the technology of the larger Eden333, introduced in the US by Stratasys in 2003. The Eden260 was first introduced in Asia and Europe in 2004 by Objet.

In addition to PolyJet Systems, which are manufactured by Objet Geometries, Stratasys sells FDM (fused deposition modeling) systems, which it manufactures. The company markets the complementary technologies in packages that it calls "the best of both worlds."

PolyJet and Eden260 are trademarks of Objet Geometries, Ltd.
Eden333 is a trademark, and FDM is a registered trademark of Stratasys, Inc.
Share