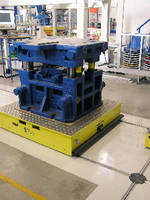 
Schloss Holte-Stukenbrock, Germany - STROTHMANN extends its rail system for the in-house transport of heavy loads, adding the quadro turnstile for right-angle junctions. In addition to the crossover mechanism and the turntable, the RoundTrack® system thus now features a further crossing element which enables parallel assembly steps and customer-specific manufacturing processes. Users can thereby pre-assemble workpieces and channel them back into the production line at a suitable place. The turnstile consists of four turntables on which trolley rollers can turn sideways. The mechanically, hydraulically, or pneumatically actuated rotary drive is mounted either in the trolley or in the floor. The pivoting transport drive enables trolleys to indepen-dently move in all directions. The new quadro turnstile has been successfully employed by a Cologne-based automobile manufacturer since 2008.

Thanks to the sophisticated RoundTrack® technology, a single person can manually move loads of up to ten tons. Combined with a roller profile which is shaped like a gothic arch, the rail made of wear-resistant hardened and po-lished steel ensures minimum rolling resistance and smooth operation. The logistics system is suitable for new and existing plants. STROTHMANN supports interested parties from planning to commissioning and beyond. The floor is prepared for the installation of the track with high-precision diamond disc cutters. All work can be carried out during production or over a weekend.

STROTHMANN has been a force of innovation in transport and handling facilities ever since the company was founded in 1976. With decades of experience in press shop automation, STROTHMANN supplies complete handling solutions for press lines, from destackers, blank loaders and sophisticated centering stations to highly dynamic stacking and destacking feeders including suction frames and tooling systems as well as control and information systems. STROTHMANN's MagShuttleTM, which features linear inductive motors, demonstrates the untapped potential of LinearRobot technology. The patented RoundTrack® floor rail system enables users to implement new, productive forms of organization in flow production lines. Due to an extremely low rolling resistance, RoundTracks® allow for simple and inexpensive planar transport of heavy loads within a production site, e.g. in airplane and transformer production. STROTHMANN's highly dynamic linear feeders, which are patented as well, are used in a wide range of logistics solutions in the derived timber and automotive industries and other industrial automation applications.