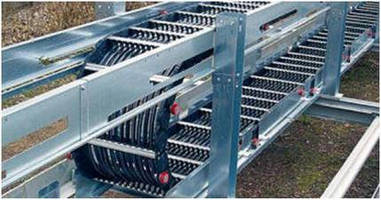 Using rolling instead of gliding to reduce friction, Rail Cable Carrier (RCC) features upper trough that glides on guide rails. Rollers are mounted on ball bearings at side of carrier, and guide rails come in standard connection height. There is no sag, and ball bearings and polyurethane roller surface contribute to quiet and smooth operation. Travel speeds to 10 m/sec are possible, and additional load (cable weight) of more than 50 kg/m is possible.

Rolling instead of gliding - the proven principle for less friction

Due to the substantial friction, it is nearly impossible to realize travel lengths greater than 200 m. With the new rail cable carrier, the upper trough does not glide on the bottom trough, it glides on guide rails. Rollers are mounted on ball bearings at the side of the carrier. The guide rails come in the standard connection height. The carrier does not sag. The tension and thrust is 90% less in comparison to gliding arrangements.

The rollers run on the guide rail and do not contact other rollers. Ball bearings and a polyurethane roller surface additionally contribute to quite and smooth operation.