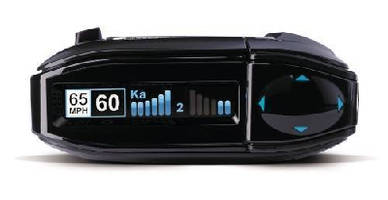 
The cutting edge detector features dual antenna detection technology that uses arrows to show drivers where a threat is coming from - front, rear or side

The Max 360's directional arrows not only show drivers where a threat is coming from - front, rear or side, but they are also color-coded to represent the frequency of the source - blue for "X Band," yellow for "K Band" and red for "Ka Band" - and are displayed alongside the relative signal strength. Both visual and audio alerts are provided to stimulate all necessary senses, keeping drivers informed and safe while on the road.

The Max 360 is also compatible with Escort's award-winning app, Escort Live!, which displays the current posted speed limit alongside the vehicle's current speed. Escort Live! connects drivers with every other Escort Live! user, turbocharging road awareness by incorporating crowdsourced alerts from detectors and app users on the road ahead.

"While many in-car devices serve to distract drivers from the road, the Max 360 is a non-intrusive device that helps drivers stay focused on the road and their immediate surroundings," says David Thornhill, CEO, Escort Inc. "As the industry leader in this space we feel obligated to lead the way in developing technology that is innovative, useful and smart.  We feel that we've really hit the mark with the Max 360 and we're offering a ticket protection guarantee to back it up."

A built-in USB port allows the Max 360 to continue to get smarter over time with easy firmware and Database updates. A new magnetic mount feature makes set-up simple and efficient.

The Max 360 is priced at $649.95 and for a limited time, when purchased factory-direct, the Max 360 comes with a ticket protection guarantee, a first for an Escort windshield-mounted detector. Visit www.escortradar.com or call 866.709.8744 for details.