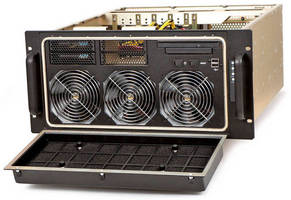 The four double-wide x16 PCIe slots are Gen 3.0 with full bandwidth natively provided by the Intel C602 chipset and dual E5-2600 processors as compared to expansion chassis or single board computer solutions multiplexing limited PCIe lanes across multiple slots. This allows the GPU boards to communicate with system memory and processors at the highest possible speed. The double-wide slots accommodate any high performance GPU processor such as the latest Tesla M2090 and K10.