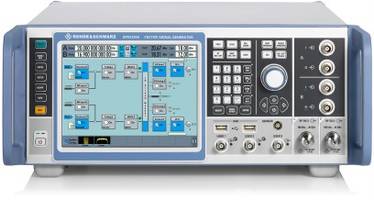 To cope with today’s demanding radar signal simulations, ultralong playtimes are needed in order to simulate realistic radar environments. Pulse sequences are calculated pulse by pulse and streamed as PDWs to an RF signal source. This avoids long calculation times and saves memory space in the signal generator. The R&S SMW200A is able to generate extremely high pulse rates (up to 1 Mpulse/s), as required for simulating dense signal scenarios and complex radar environments.

Users can connect their PDW-based radar scenario simulators directly to the vector signal generator via LAN. The R&S SMW-K503 software option allows easy, fast and cost-effective integration of the R&S SMW200A as a signal source in state-of-the-art radar simulation environments.

With its extremely high processing speed of up to 1 MPDW/s, the R&S SMW200A enables testing of radar receivers at extremely high pulse rates. Customers additionally benefit from the signal generator's excellent RF performance.

With an optional integrated second signal path, frequently needed additional interfering signals, such as adjacent communications signals, can be implemented quickly and easily in the single-box solution. The R&S SMW200A with two independent paths is the ideal solution for testing DUTs with several channels or generating radar signals in two different frequency bands. Each path can receive PDWs independently via LAN and output them on the same frequency or different frequencies. Multiple channels can be coupled phase-coherent for simulating different angles of arrival (AoA). The R&S SMW200A dual RF channel concept also significantly simplifies the setup and saves space.