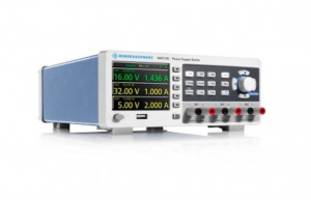 Available in two channel R&S NGE 102 and three channel R&S NGE 103 models, R&S NGE 100 Series Power Supplies deliver up to 33.6 W, 32 V and 3A output power, voltage and current respectively. Offering up to 64 V and 96 V of output voltages when two channels are connected in series and parallel, units are housed in 19 in. rackmount with rack adapter. Product comes with USB interface and can be controlled via LAN or WAN.

Rohde & Schwarz introduces its new power supply series with the two-channel R&S NGE102 and the three-channel R&S NGE103. The robust instruments are easy to operate and are the perfect choice for a wide variety of applications, from education to R&D labs to manufacturing. Fan control ensures that they are quiet. The power supplies deliver up to 33.6 W output power per channel with low ripple. They offer a per-channel output voltage of up to 32 V and output current of up to 3 A.

The R&S NGE100 additionally features several convenient options not otherwise available in this price class. All channels are galvanically separated, earth free and electrically identical, so that even complex switching operations can be performed without grounding problems. Users can switch the channels in series or in parallel. Two channels switched in series deliver an output voltage up to 64 V, three channels up to 96 V. When the channels are switched in parallel, the instrument supplies a maximum of 6 A for two channels and 9 A for three.

Maximum values for current, voltage and power configurable for each channel

The R&S NGE100 provides very flexible protection options. Users can enter maximum values for voltage, current and power separately for each channel. The electronic fuses can also be linked with other channels. All linked channels will be switched off as soon as one of the linked channels reaches a limit. Users can define a delayed response time to prevent the power supply from switching off in the event of a short current spike.

The small, compact power supplies can be used on the benchtop or mounted in a 19" rackmount (with a rack adapter). They can be remote controlled via the integrated USB interface or optionally via LAN or WLAN. A digital trigger option is also available. A key code activates the options.