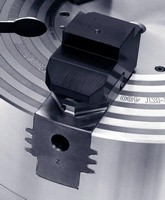 With no degradation of chuck performance in establishing 0.02 mm repeatability, V-Change (VC) Quick Change Jaw system permits top jaw changeover in as little as 5-10 sec in manual mode. Base jaw features precision ground diamond shape projection with multiple locating surfaces on which top jaw is positioned and spring-loaded pressure pin engages hole in top jaw for location accuracy. System can be used for both ID and OD chucking applications.


Forkardt North America, supplier of precision workholding products, including the QLC series of sliding jaw universal power chucks, now complements its lineup with the addition of the optional, patent pending V-Change (VC) quick change jaw system. With absolutely no degradation of the chuck's precision performance in establishing 0.02mm repeatability, the VC jaw change system permits top jaw changeover in as little as five to 10 seconds in a manual mode (as compared to 5-10 minutes with conventional bolt-on jaw change methods), plus the VC system can be easily integrated into an automatic jaw change operation.

The VC Quick Change technology is ideal for turning centers and machine tools having frequent part changeovers and for systems requiring high levels of flexibility along with productivity and quality throughput. The fast jaw changes reduce downtime while the precision afforded by the system can minimize setup procedures, adjustments and compensation corrections.

In addition to the system's exchange speed and precision, the VC jaws are typically more compact and require less space than general mounting systems, yet provide high-strength clamping forces to secure workpieces under the most demanding conditions. The system can be used for both I.D. and O.D. chucking applications and, in conjunction with the QLC chucks, can also generate variable, sensitive gripping pressures to permit secure holding of thin-walled parts without deformation.

The key element of the V-Change technology is its base jaw featuring a precision ground 'diamond' shape projection with multiple locating surfaces on which the top jaw is positioned-a spring loaded pressure pin also engages a hole in the top jaw to enhance location accuracy. To complete a change and lock the new jaw(s) in place, a T-handle wrench is used at each jaw to actuate a lock pin that secures the top tooling for manual changes; for automatic changeovers, a simple device offered by Forkardt North America and installed on the QLC chuck, is actuated for locking or releasing the top jaws through a regulated stroke of the chuck's jaw system.

In addition to the option of V-Change Quick Change Jaws, QLC power chucks' workholding capabilities are bolstered with configuration options to meet a variety of application needs starting with three-jaw basic models having diameters of from Ã¸162mm to Ã¸400mm. The QLC-KS chuck series offers 40% larger bores than the standard models for large workpiece needs; the QLC-LS chucks in both a two-jaw and three-jaw versions feature up to 95% more stroke length for workpieces with diameter variations. The QLC-AG models are automatic compensating chucks for off-center work (simple conversion to self-centering mode when necessary). Mounting flanges, adaptors, and adaptor plates for most turning systems as well as a variety of hard and soft jaw sets are also offered.

For additional information regarding Forkardt and its products, visit www.forkardt.com
Share