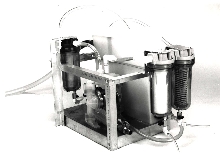 Compact Model #370 removes suspended and dissolved oil from wastewater for environmentally safe disposal. It has self-priming air operated diaphragm pump and 2 stages of oil separation. Disposable elements that remove oil are changed after treating 1,000 gal. Applications include removing oil from compressed air line condensate prior to sewering, and cleaning oil and hydrocarbons from spills to permit discharge of water into groundwater.

A new pump/separator unit from Keller Products, Inc. (Lexington, MA) removes both suspended and dissolved oil from water to treat 60 gallons per hour of oily wastewater for environmentally safe disposal. Typical applications include removing compressor oil from compressed air line condensate prior to sewering, and cleaning oil and other hydrocarbons from confined spills to permit discharge of the water into groundwater. The Model #370 pump/separator contains a self-priming air operated diaphragm pump and two stages of oil separation. The patented Keller plastic coalescing elements, which never need to be cleaned or replaced, remove suspended oil in the first separation stage, and the final filtration/adsorption stage removes dissolved hydrocarbons. The compact Model #370, which weighs 35 pounds and is mounted in a 20-inch square frame, is delivered ready to run, requiring only connection to a 1/4-inch compressed air line (no electricals). The self-priming pump can draw the oily liquid from a drum, tank, or below-grade pit, and the treated water under pump pressure may be sewered or delivered to a holding tank anywhere on the facility. The separator may be run continuously or intermittently with minimal operator attention, and it may easily be moved to a new location and set up in a matter of minutes. The plastic coalescing elements which remove suspended oil are never replaced or serviced, and the disposable elements which remove dissolved oil are changed after treating 1000 gallons, at a cost of $17.25 per change.
Share