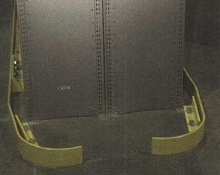 Able to be used in both new and existing facilities, SEG(TM) forklift protection device is constructed of heavy-gage spring steel, and flexes when impacted. Its cushion action guides trucks into aisles between vertical racking systems, and eliminates possibility of impact between trucks and racks.

Constructed of heavy-gage spring steel, the SEG(TM) flexes when impacted. The cushion action guides trucks into the aisles between vertical racking systems. Easy to install, the SEG(TM) can be used in both new and existing facilities.

When factoring the combined cost of replacing damaged vertical supports, downtime, inventory damage, and other related costs, the SEG(TM) can save literally thousands of dollars in damages that can occur every time the fork of a lift truck damages a vertical support. The SEG(TM), when properly installed, can eliminate virtually all possibility of impact between the truck and the racks.

SEG(TM) is the product of SEGCO(TM), the newest venture for James R. Kuester. An Indianapolis native and entrepreneur, Kuester has worked in manufacturing for 15 years, most recently as CEO of AMPECO in Indianapolis.

Kuester formally began SEGCO(TM) operations in January 2002. SEG(TM) is the first product in what Kuester predicts will be just the beginning of other innovations for the workplace.

SEGCO is a member of Material Handling Industry of America(R).
Share