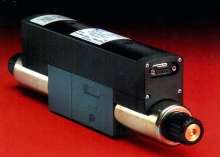 New Proportional Valve Can Be Programmed Via PDA or Laptop Computer

Continental Hydraulics has introduced a new line of D03 size proportional control valves with onboard electronics, available immediately through all Continental Hydraulics Distributors. These new valves come pre-programmed from the factory, or can be programmed from a laptop computer or flash card equipped Personal Digital Assistant. There's no need to connect complex jumpers, or tweak imprecise potentiometers. A single Windows-based screen lets the user quickly and accurately set all programmable functions such as null, gain, ramp-up/ramp down dither, input signal, and automatically calibrate the valve.

VED03M Proportional Control Valves can be ordered in 5 flow metering configurations, 3 spool centered conditions, and 6 flow rates. The wide variety of choices covers most typical applications. Most users will find that they can get all the performance they need, while spending only a fraction of
the price of competitive proportional valves.

PowrFlow(TM) VED03M Proportional Valves may be used in indexing applications on machine tools, in transfer systems where big loads must move smoothly and stop consistently, or wherever precise proportional motion control is a must.

According to Travis Piehl, Engineering Project Leader at Continental, easy programming was the first priority in developing these valves, but performance and durability couldn't be compromised. Piehl says that the biggest breakthrough is the use of state-of-the-art Hall Effect sensors to monitor and control spool position in the valve, in lieu of Linear Variable Differential Transformers (LVDT). "Hall Effect sensors have been in use for years in the automotive industry, so they're well proven. They lend themselves perfectly to computer control, so programming is a snap. Simply plugging in a computer lets you run full diagnostics to monitor the system, and change any parameters. It s easier than programming a cell phone" he adds.

Ron Neitzel, National Sales Manager at Continental, says that many users have been forced to buy higher performance servos that are not needed, simply because there was no option. "For those few users who really need it, we offer full-blown electrohydraulics," says Neitzel, "but our research showed that the majority of the systems in the market fell in the 15 hertz response range. Our VEDOSMs provide that response with the necessary precision at considerably lower cost, so why pay for high end servo performance that you will never need or use? We feel that the ease of programming, plus real world performance, coupled with big dollar savings should be a real draw to machine designers. We're confident that these valves will find wide acceptance in the fluid power industry."

Continental Hydraulics PowrFlow(TM) VED03M Proportional Valves are available in 6 flow rates, from 1 to 9 GPM. Three spool centered options, plus 5 metering options results in 90 possible combinations, so users can specify a virtually custom designed valve. The D03 style valves are rated to 5000 PSI, are equipped with 12/24 VDC solenoids, and use standard 7-pin connectors at the system end. Connection to a Windows-based computer uses an RS232 cable, or with the Personal Digital Assistant via a standard flash card fitting. Should the valve ever need repair, individual electronic or valve components can be ordered. There's no need to replace the entire valve.