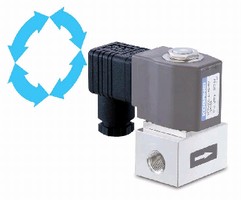 Offered in brass or stainless steel, KFPV050 Series direct-acting, 2-port plunger valves provide stepless variable control of gases and liquids. Solenoid can be oriented 360Â°, and elbow electrical terminal can be positioned every 90Â° top to bottom and left to right. Valves are used with KFPC1 Controller, which accepts standard input signals of 4-20 mA or 0-10 V. RAMP response time can be adjusted from 0-10 sec to compensate for large fluctuations in standard input signal.


Humphrey Products Company has introduced the KFPV050 Series Proportional Control Valves for stepless variable control of gases and liquids. The valve is a direct acting 2-port plunger type with a body available in brass or stainless steel. The solenoid can be oriented 360° and its elbow electrical terminal can positioned every 90° top to bottom and left to right for maximum wiring versatility. The valves are designed for use with the KFPC1 Controller which delivers a repeatability and response accuracy of 2% F.S. or less, and a hysteresis of 5% F.S. or less. On-board support circuits make initial setting possible without any external input.

The Humphrey KFPC1 Controller accepts standard input signals of 4 - 20mA or 0 - 10V. RAMP response time can be adjusted from zero to 10 seconds to compensate for large fluctuations in the standard input signal. The controller has a zero point switch-off function to ensure all valves are completely closed, LED monitor signals that indicate settings and a built-in temperature compensation circuit. Two potentiometers allow adjustment of the current settings for initial valve opening and when the valve is fully open.
Share