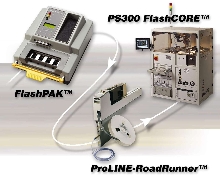 Growth in volumes of High-Density flash is being driven by market demand for cellular handsets, mobile devices and personal electronics products. Rapidly growing desire for rich color and multimedia features is driving Flash densities to 1GB and beyond. Manufacturers meet these market requirements by increasing densities and introducing 'stacked' packages that include RAM, logic or multiple flash devices in one package.

Performance Enhancements
Designed to scale and adapt to changing device technologies, the FlashCORE programming architecture is evolving to meet these challenges of ever increasing device densities and the added complexity of multichip packages - 2 or more devices within one package, each requiring a programming operation during manufacturing.

The High-Density enhancements include improvements in 3 aspects of FlashCORE systems, all available as easy upgrades to existing systems:

o A feature upgrade to version 5.2 TaskLink for Windows, Data I/O's signature software interface tool for creating and managing programming jobs. TaskLink provides detailed device programming features that, in many cases, can truly invoke the unique characteristics of the end product. These may include 'special data' features in some devices, serialization options to assign a unique ID in a consumer product, or file translation options to customize the delivery of data to devices.

Product and Upgrade Availability
New FlashCORE based programming systems incorporating these enhancements will be available to ship to customers worldwide in March 2004. Software and hardware upgrades will also be available in March for customers using traditional FlashCORE systems. All upgrades are compatible with previously released device support, so upgrading is seamless.

FlashPAK customers on Annual Programmer Support contracts will receive the software enhancements automatically as a benefit of that program.

ProLINE-RoadRunner(TM): The world's fastest and most cost effective in-line programming system
The ProLINE-RoadRunner an automated in-line programming feeder, is targeted for high-volume users of High-Density flash memory devices and microcontrollers, including cellular phone, automotive, and consumer electronics manufacturers. The RoadRunner removes devices from tape, programs two to four devices in parallel, then delivers the programmed parts to the pick-up point of the placement machine.

About Data I/O
Celebrating 30 years of innovative leadership in the device programming industry, Data I/O Corporation® (NASDAQ: DAIO) provides manual and automated device programming systems that specifically address the requirements of engineering and manufacturing operations. FlashCORE(TM) is the architecture behind a family of Programmers that deliver the highest throughput and lowest cost per programmed device. For Flash, Micro and Logic device support, The MultiSyte and UniSite families provide universal support and versatility to address a wide variety of programming needs. Data I/O Corporation is headquartered in Redmond, Washington, and has sales and service offices worldwide. For more information, see www.dataio.com or call 800-426-1045.
Share