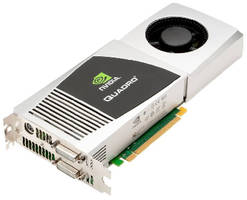 With its sophisticated GPU architecture and industry leading features, the Quadro FX 4800 delivers a substantial boost in graphics performance and capabilities, allowing users to continue to push the boundaries of realism and performance in markets such as: architecture, content creation, science and medicine.

"Some of the world's most challenging visual computing problems are solved on the Mac platform," said Jeff Brown, general manager, Professional Solutions, NVIDIA. "The Quadro FX 4800 provides the power and speed to meet these demanding requirements."

Pricing and Availability
NVIDIA Quadro FX 4800 GPU for Mac has a MSRP of $1,799 USD, and will be available starting May 2009 through Apple.com and select Apple resellers and workstation integrators. The Quadro FX 4800 for Mac will also be available through NVIDIA channel partners PNY Technologies (US and EMEA), Leadteck (APAC) and Elsa (Japan). For more information on NVIDIA professional technologies and products, please visit: www.nvidia.com/quadro.

About NVIDIA
NVIDIA (Nasdaq: NVDA) is the world leader in visual computing technologies and the inventor of the GPU, a high-performance processor which generates breathtaking, interactive graphics on workstations, personal computers, game consoles and mobile devices. NVIDIA serves the entertainment and consumer market with its GeForce® graphics products, the professional design and visualization market with its Quadro® graphics products and the high-performance computing market with its TeslaT(TM) computing solutions products. NVIDIA is headquartered in Santa Clara, Calif. and has offices throughout Asia, Europe and the Americas. For more information, visit www.nvidia.com.
Share