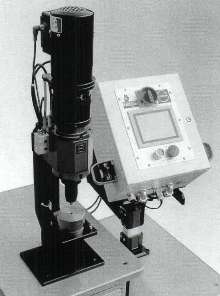 The WatchDawg Monitoring / Control System ensures consistency and uniformity of orbital formed rivets. It can precisely monitor and control the forming process, including all aspects of the forming tool and workpiece.

Orbitform's WatchDawg System features the ability to monitor and control:
o Minimum / maximum forming force achieved and variable rate of forming force
o Forming to a given height, fixed or variable position at programmable speeds
o Form to a resulting clamp load between the parts being fastened together
o Load cell force up to 20,000 lbs. based on machine capacity.

The WatchDawg interface provides comprehensive feedback with data easily integrating into automated systems. Multiple programs can be stored to allow for quick changeover from application to application.

At the heart of the system is a loadcell mounted inside the powerhead of the spindle assembly. The loadcell measures forming force applied to a part. Depending on machine size, a linear displacement transducer (LDT) or linear encoder is integrated into the powerhead and used to measure stroke. These sensing devices determine form depth and position at peak force. Benefits include easy calibration, fast response, smooth production line integration, and the ability to keep fixturing interchangeable.

The system monitors rivet / form collapse and rivet length through set point limits. It tells how much of the rivet has been formed and if the load cell trigger point is met. The system also controls by forming-to-a-force, commonly used on pivoting joints or parts that need only to be tight. This
feedback closes-the-loop between powerhead and part.

Profit from over twenty years of industry experience and let the
WatchDawg guide your forming process! For further information please call 517-787-9447 or email sales@orbitform.com
Share