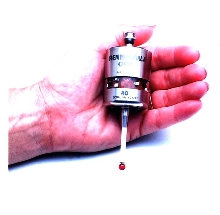 Ultra-compact OMP40 probe measures 40 mm dia and 50 mm long, suitable for probing on small machining centers and high-speed machines fitted with small HSK and small taper spindles. It has 360 deg optical transmission system with range of up to 3 meters, allowing probe operation in any spindle orientation. OMP40 is sealed to IP68 and incorporates digital filter. Applications include automated part set-up and in-cycle gaging.

Users of machines fitted with OMP40 will now be able to realize the benefits of probing, including set-up time reductions of up to 90%, reduced scrap caused by setting errors, reduced fixture costs, and improved process control.

The OMP40 uses miniaturized electronics resulting in an ultra-compact probe measuring only 40 mm diameter and 50 mm length, while delivering metrology performance of 1l m repeatability. The OMP40 operates with Renishaw's optical signal transmission system and is a further development of the company's extensive range of products for machining centers. Renishaw OMP40 machine tool probe The OMP40 has been designed specifically to meet the demand for probing on small machining centers and the growing family of high-speed machines fitted with small HSK and small taper spindles. For these smaller machines, the length of the OMP40 matches typical tooling lengths, bringing the significant advantages of probing to such machines for the first time.

The OMP40 features a 360-degree optical transmission system with a range of up to 3 meters, allowing probe operation in any spindle orientation. The result is simplified system installation and set-up on small machine tools, making the OMP40 suitable for retrofitting to machines without probing. With any optical probe transmission system, battery-life is important, and OMP40 boasts industry leading economy. At typical levels of probe use, a battery-life in excess of 6 months can be expected, minimizing machine downtime and maintenance costs.

User programmable parameters make the OMP40 simple to optimize for specific machine applications. The probe is programmable through trigger-logic, a unique and simple programming method, allowing users to program probe options without accessing probe internals, eliminating the risk of damage due to coolant and debris ingress.

Sealed to IP68 to withstand harsh machine tool environments, OMP40 incorporates a digital filter which makes the system highly resistant to triggers induced by shock and vibration. OMP40 is fully compatible with existing Renishaw optical systems and can be used with high-speed, single touch or double touch probing routines.