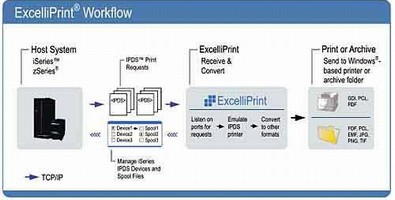 The Key to IPDS Printing Is ExcelliPrint


IDAHO FALLS, Idaho, June 13 -- Brooks Internet Software has released ExcelliPrint® Standard and Premium version 3.2. With updates and enhancements, ExcelliPrint® continues to be an essential tool for IPDS printing in mixed IBM and Windows® print environments. ExcelliPrint supports any Windows printer, or any PCL printer (for much faster printing), and saves to PDF as well.

At $495 per output destination, ExcelliPrint Standard targets budget-conscious administrators with an affordable, flexible replacement for IPDS DIMMs and other hardware print servers. IPDS DIMMs (http://ipds.brooksnet.com/ipds-dimm.html) are not supported on all printers and have no archiving functionality. Unlike DIMMs, ExcelliPrint can be used with printers from any manufacturer, be it any model type (even dot matrix printers), local, desktop or networked printer.

ExcelliPrint Premium goes further by transforming IPDS documents into additional formats like PDF and TIFF, and includes an interface for managing System i IPDS devices and spool files from within a browser. Premium offers the most comprehensive and stable IPDS to Windows printing solution available today for just $795 per output destination.