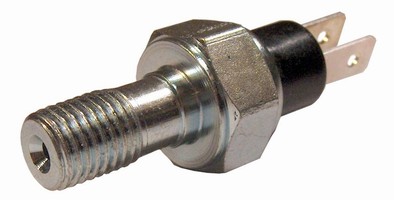 Due to its IP65 sealing and high burst rating, Series 1000 with high resistance to shock and vibration is suited for use in harsh environments. Unit can be used to actuate brake lights in brake systems for small vehicles such as ATVs, snow, and sport vehicles, as well as in applications requiring high operating pressure and low set point. Other applications include hydraulic brake systems in compact agriculture tractors, utility vehicles, trucks, and lift trucks.

MINNEAPOLIS, October 13, 2008 - Honeywell introduces the Series 1000 pressure switch for potential hydraulic brake pressure applications. Honeywell's Series 1000 switch excels in brake systems used in many harsh environments such as extreme weather conditions or particle-filled areas due to its IP65 sealing and high burst rating. With its high resistance to shock and vibration, this pressure switch is designed to withstand pressure spikes in critical systems.

Honeywell Sensing and Control has utilized our engineering expertise to reduce part count on this product by approximately 75%. With fewer parts, the switch's cost and complexity are optimized. The new design may contribute to lowering installation time by minimizing the time required for adjustments and potentially the need for field maintenance. The result is reduced field failures, even in the most demanding environments. Custom versions of this product have been in operation for over 2 years in 20,000 ATVs with no known field failures reported.

With its small size and superior sealing, the Series 1000 pressure switch may be used to actuate brake lights in brake systems for small vehicles used in many harsh environments. Typical vehicles include ATVs, snow, and sport vehicles as well as smaller motorcycles and scooters. The switch may also be used in applications where high operating pressure and low set point are required. Other potential applications may include hydraulic brake systems in small vehicles, compact agriculture tractors, utility vehicles (UTVs), trucks, lift trucks, and other small self-propelled vehicles.