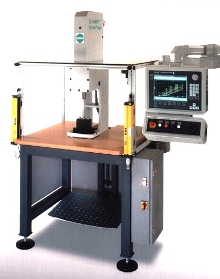 SCHMIDT-Feintechnik offers four compact, ultra-precise ServoPress Assembly Systems with flexible components and easy-to-understand and easy-to-use operator interface. The electromechanical SCHMIDT(R) ServoPress module with a servo motor-driven press ram and the Windows NT-based SCHMIDT(R) PressControl 4000 with CNC and PLC controls are the main components of the system.

The ServoPress System continuously performs precise assembly operations without mechanical stops in the workpiece (assembly components) and/or tooling. This is achieved by closed loop control of the numerically given force, stroke and ram feed rate parameters. The system organizes, administers and graphically presents the production data.

The PressControl 4000 can perform either random or simultaneous operations on up to six ServoPress units or other CNC-operated axes such as positioning devices and robots. All four ServoPress System models function as either modular units for system integration or as single station bench-top cell units.
Share