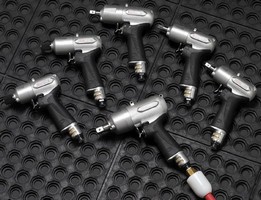 In addition to increased durability, Q Series pulse tools have a lower operating cost. Featuring improved motor efficiency, the tools supply more power with less air than competitive models. Additionally, the lube-free, dual chamber air motor releases less oil mist into the environment. The non-transducerized pulse tools deliver a maximum torque of up to 100 Newton-meters, while transducerized models deliver up to 155 Newton-meters. New models due for release later this year will extend the upper torque range even further.