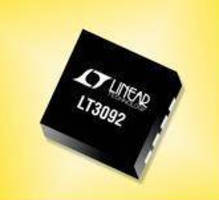 Available in 3 x 3 mm DFN-8, 8-lead SOT-23, and 3-lead SOT-223 packages, Model LT3092 features programmable output current from 0.5-200 mA and 1% initial accuracy. Current regulation over 1.5-40 V is better than 10 ppm/V. Since IC requires no capacitors, it is suited for intrinsically safe applications in which output may be shorted and no sparking can be tolerated. Reverse supply tolerance and thermal shutdown protect both IC and load.


MILPITAS, CA - April 27, 2009 - An innovative new power IC from Linear Technology Corporation now provides system designers with a two-terminal current source. Until now, current sources were imprecise or had to be designed from other components. The new LT3092 200mA two-terminal current source overcomes the problems associated with previous current sources, with its wide voltage range, high AC and DC impedance, good regulation, low temperature coefficient, and the fact that it requires no capacitors. The device's two floating terminals make it easy to use.

The LT3092 features 1% initial accuracy and a very low temperature coefficient. Output current is programmable from 0.5mA to 200mA and current regulation over 1.5V to 40V is better than 10ppm/volt. Unlike other analog integrated circuits, the LT3092 leverages special design techniques for high DC and AC impedance, ensuring stable operation without supply bypass capacitors. Since the LT3092 requires no capacitors, it is ideal for "intrinsically safe" applications in which the output may be shorted and no sparking can be tolerated. Reverse supply tolerance and thermal shutdown protect both the IC and the load.

According to Robert Dobkin, Vice President, Engineering and Chief Technical Officer for Linear Technology, "The LT3092 current source adds a significant new component to the designer's toolbox for future designs. Its ability to easily generate a constant current enables the simplification of many circuits. It can be used in precision or remote current limiting, bias circuits, temperature sensing, active loads, and signaling. Further, the LT3092 can be easily extended to operate at higher voltages or higher currents."