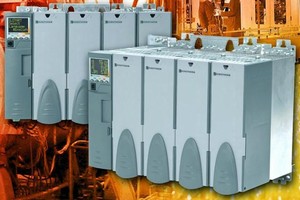 
Leesburg, 7 December 2007. Load management is a critical factor in controlling peak electricity power demand. This is particularly important for multiple load users such as the glass manufacturing, heat treatment and food industries.

The versatile new EPower controller, which has been under development for 3 years, can be used in true power, phase angle firing or burst firing modes to suit the particular application. In the new energy conscious world, plants can save power by switching from phase angle to burst firing power control. The benefits can be significant, saving an average 1MW furnace more than $2,000 per month on energy costs.

The technology that sits within the EPower controller cuts power demand and in so doing reduces costs - by employing two techniques known as load sharing and load shedding.

In many applications the "installed" power exceeds the "required" power during normal operation. However, this overcapacity can be manipulated by switching between loads over time in such a way that the power required from the network at any moment in time is lower than the installed power capacity.

In terms of load sharing, Eurotherm's new EPower controller uses technology which ensures that a group of loads, up to a maximum of 63, can be switched on/off in such a way that the average power demand is evened out. This desynchronized switching of loads reduces the peak power demand typically experienced when, for example, a furnace is started up and electrical loads are switched on in a traditional synchronized fashion. Eurotherm's new technology then uses an "Efficient Power" function to further improve this demand profile.

This situation is further improved with the use of the new technology's load shedding feature. This allows customers to define the maximum allowable peak demand.

Because this feature will actively reduce the power applied to certain loads it cannot be used in all circumstances. Nevertheless, it is ideal for manufacturers who have to control large thermal masses, for example those associated with a lehr.

Tests show that this function can reduce peak power demands during normal operation by 20%.

It is clear from this that load sharing and load shedding enabled through the EPower controller can bring substantial cost savings for multiple load users. The level of such savings will depend on the rates and conditions imposed by different electricity supply organizations in different markets around the world.

Eurotherm is a key business within Invensys, the global automation, controls and process solutions Group. Invensys products, service expertise and ongoing support enable intelligent systems to monitor and control processes in many different environments. Leading companies in a wide range of industries rely on Invensys to help them perform with greater efficiency, safety and cost-effectiveness.

Headquartered in London and listed on the London Stock Exchange, the Invensys Group is made up of four businesses: Process Systems, Eurotherm, Rail Systems and Controls. Overall The Group has over 30,000 employees working in 60 countries.