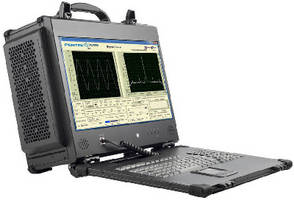 Equipped with 3.6 GHz 12-bit ADC, TalonÂ® RTR 2729A can stream contiguous data to disk in real-time at 4.8 GBps when coupled with PCIe Gen. 3 SATA III RAID controller. User-programmable DDC allows system to capture tunable IF signals with bandwidths up to 360 MHz continuously for over 4 hr. Supplied in 16.0 x 6.9 x 13.0 in. housing, recorder uses Pentek Virtex-7 based Onyx software radio board for data streaming and is available in 7.6 and 15.3 TB SSD configurations.


Portable system for rugged environments such as ground vehicles, ships and aircraft

One or two channels of recording with up to 15.3 TB SSD storage to NTFS RAID

UPPER SADDLE RIVER, NJ -- Pentek, Inc., today announced a new recorder for the popular family of Talon® RF/IF signal recording and playback systems: the Model RTR 2729A rugged portable recorder, suitable for military and aerospace applications. Equipped with a 3.6 GHz 12-bit A/D converter, the RTR 2729A is capable of capturing an extremely wide band of signals in real time to disk. The user-programmable DDC (digital downconverter) allows the system to capture tunable IF signals with bandwidths up to 360 MHz continuously for over four hours. The RTR 2729A is the first portable recorder based on a new packaging scheme that boasts a smaller package, lighter weight and faster data rates.

The RTR 2729A uses a high-powered Pentek Virtex-7-based Onyx® software radio board with a PCIe Gen. 3 engine to provide data streaming for the high-speed A/D converter. Coupled with a high-performance PCIe Gen. 3 SATA III RAID controller, the RTR 2729A is capable of streaming contiguous data to disk in real time at rates up to 4.8 GB/sec, which is 2.4 times faster than the previous generation.

“Even though the RTR 2729A is 25% smaller than its predecessor, it delivers twice the storage capacity and more than double the recording speed. In addition, the DC power supply option makes it ideal for use in vehicles,” said Chris Tojeira, Recording Systems director for Pentek. “Getting an ultra-high performance recorder into the field right at the antenna has never been easier,” he added.

The hot-swappable Solid State Drive (SSD) array is available in 7.6 TB and 15.3 TB configurations and supports RAID levels 0, 1, 5, or 6. The SSDs are meticulously qualified by Pentek for optimum use in rugged and portable applications. The hot swappable solid-state drives exhibit high immunity to shock and vibration for full operation in ground vehicles, ships and aircraft.

All Talon RTR Portable Recorders are built on a Windows 7 Professional workstation with an Intel Core i7 processor and provide both a GUI (graphical user interface) and API (Application Programmer’s Interface) to control the system. Systems are fully supported with Pentek’s SystemFlow® software for system control and turn-key operation. The software provides a GUI with point-and-click configuration management and can store custom configurations for single-click setup. The software also includes a virtual oscilloscope and signal analyzer to monitor signals before, during and after data collection.

Customers can select the recording I/O performance that best matches their recording system requirements. The Talon RTR Portable Recorders start at $74,995 USD. Delivery is 6-8 weeks ARO for all models.

SSD storage options include 7.6 TB and 15.3 TB capacities. New with the RTR 2729A is an 18 to 36 VDC power supply option for vehicle powered applications. Optional GPS time and position stamping captures critical signal information within each recording.

For access to the release and data sheets, please visit: http://www.pentek.com/whatsnew/viewrelease.cfm?index=193