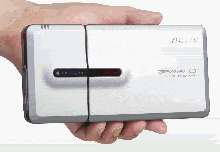 Offering instant `plug-and-play' capabilities, Giga Vault hard-disk media connects via the USB 2.0 interface to a Windows® Operating System-based computer, allowing users to quickly and easily transport large data files from one computer to another. The high-speed USB 2.0 interface provides a transfer rate that's up to 40-times faster than the USB 1.1 interface. An i.LINK® IEEE 1394 digital interface for Mac® computer users is expected to be available shortly.

"Giga Vault portable hard-disk media is specifically designed for users who want to carry their personal library of digital files wherever they go," said Michael Lucas, director of consumer and convergent media products for Sony Electronics' Business Solutions and Systems Company. "With its spacious 40 GB capacity, the unit can store a variety of rich media files such as Microsoft PowerPoint® presentations with graphic-intensive content, high-resolution digital photos, video clips and other multi-media files."

Designed to be extremely portable, the unit weighs only 10 ounces and also sports a shock absorbing body that helps protect the integrity of files when in transport. The unit also features an innovative form factor in which the hard-disk media and the USB 2.0 interface adaptor "cap" can be purchased together or separately. According to Lucas, this scalability enables users to purchase the components that best meet their needs. Customers can purchase additional hard disk media as their storage requirements grow, or buy an extra adaptor cap for a second computer, enabling them to carry just the media between their PCs.

Giga Vault portable hard-disk media comes supplied with driver software that is required for Windows® 98SE operating systems and recommended for Windows Me/2000/XP systems. It also comes with a rechargeable battery that offers between one-and-a-half and five hours of steady power supply depending upon usage.