The durable, relatively lightweight PC is equipped with a 15" LED backlit LCD, glass on glass resistive touch screen and has the ability to endure extreme temperatures. Besides its sleek and portable 20 lb body, other features include a low power Intel® Atom(TM) processor, as well as optional Bluetooth, GPS, speakers, camera, microphone, WiFi antenna, battery and charger. Battery options include either a 115/230 volts AC version or a 24 volts DC version. It is also rated NEMA 4X and FM Approved pending Division 2 and Zone 2 ATEX rating.

D3 will unveil their new PC at their upcoming trade shows including Interphex in NYC and OTC in Houston. There, they will be able to quote the machine for customers, and they expect distribution to begin in June.

The 4823CX Series is essentially a new product in the industrial computer business with nothing else comparing to its small, sturdy, self-contained structure. Customer feedback inspired D3's innovation.

"We would go to trade shows and hear 'We like your product, but it's too heavy to carry around in the field,'" says D3 General Manager, Mike Hadaway. "There was a definite void in the market for a product this lightweight and rugged, so we filled it."

Daisy Data Displays, Inc. is an international developer and manufacturer of specialized and rugged computers, displays and keyboards designed to sustain extreme industrial and plant environments. The company is based out of York Haven, PA. 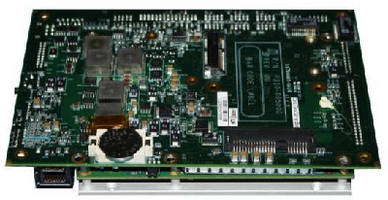