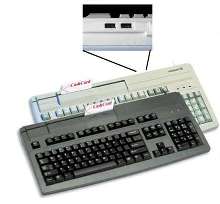 Point-Of-Sale Keyboards with magnetic stripe readers provide plug-and-play interface, and are programmable using Cherry Tools utility. Users can program keyboards with graphical interface, and integrate keyboard and magnetic stripe reader programming into any application they choose. Programming can be transferred to any number of computers and keyboards, allowing large rollouts of computer systems and POS systems.

PLEASANT PRAIRIE, WI-Continuing to lead the POS industry as a supplier of specialty keyboards, Cherry Keyboards announces a new innovation to its keyboard product line with the addition of USB interfaces to its Point-of-Sale keyboards. "Adding USB functionality to our Point-of-Sale keyboards with magnetic stripe readers only makes sense," says Michael Bauhs, Product & Marketing Manager at Cherry. "As the computer industry migrates toward Plug-and-Play USB and away from the PS/2 interface, we realized that our customers would begin to demand our POS keyboards with USB interface."

With Cherry Tools, users can freely program Cherry keyboards with an easy-to-use graphical interface, and implement the keyboard and mag stripe reader programming into any application
that they choose.

Further, the keyboard programming can be easily transferred to any number of computers and keyboards, making large rollouts of computer systems and POS systems fast and
easy.