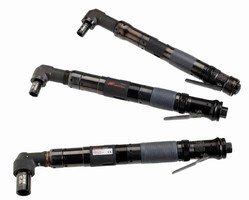 Suited for industrial, assembly, and MRO applications, QA8 series pneumatic nutrunners can be used on hard or soft joints, including plastics, composites, or metals and include ergonomic grips. Devices operate via lubrication-free motors and utilize adjustable shut-off clutches and reverse rings. They are customizable to operator's application in both straight and angle configurations.

"Our customers asked us for better accuracy and durability in a user friendly package - that's exactly what this family of air nutrunners delivers," said Scott White, global category manager with Ingersoll Rand. "Based on the positive customer feedback we've received since the release of the QA4 series nutrunners, we're confident the market will be equally excited by the release of the full family of QA4/6/8 Series."

QA8 series nutrunners have maximum torque outputs of 225 Nm and run off lube-free motors. They are easy to maintain and service - which means less downtime - and are fully customizable to the operator's application in both straight and angle configurations.