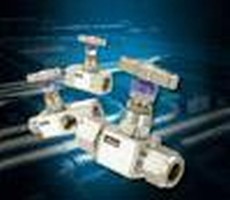 Suitable for applications where contaminated media can lead to premature valve failure, HRPV Series rising plug valve features straight-through design to avoid build-up of deposits and allows cleaning to take place by rodding. It features 8-turn actuation cycle with rolled spindle thread and smaller sealing area. Fabricated from 316 SS, valve has Â¼ in. orifice with Cv of 1.8. Polyetherketone seat allows valve to operate up to +200Â°C.

Called the HRPV Series, the rising plug valve's 'straight-through' design supports higher flow rates than needle valves, helping to avoid the build-up of deposits. It additionally allows cleaning to take place by rodding. These features make it ideal for applications involving heavily contaminated media, such as those frequently encountered in oil and gas processing facilities.

"A major concern of users of this form of valve is its reliability, and the high costs associated with in-service failures and down-time," said Brian Rice, Parker Instrumentation's Oil and Gas Applications Engineer. "Our design goals were to increase the typical cycle life and reliability that users can expect from a rising plug valve, while also creating a cost effective solution."

To meet this need, Parker developed a unique new seat design that reduces the size of the sealing region, allowing a high integrity seal to be created with less force. This addresses a common failure mode associated with this kind of valve, and development testing has demonstrated an extended cycle life compared with similar valves currently available.

The HRPV valve has a ¼ inch (6.4mm) orifice with a Cv of 1.8, but can be supplied with either ¼ or ½ inch ports, with a range of end connections including male and female NPT, and twin-ferrule A-LOK compression tube fittings. The latter option is well suited to space- and weight-sensitive applications such as on offshore platforms, and can reduce weight and space by around 30% compared with standard threaded versions. Integral end connections also substantially reduce assembly time.

Two types of body are available: an inline 2-port design, and an inline design with a standard 3-port gauge interface at one end. In its smallest ¼ inch female NPT version, the overall body length of the compact valve measures just 2.38 inches (60.5 mm).

As standard, the valve is provided with PEEK (polyetherketone) seats, which allows the valve to operate up to 200+ degrees C, and resists wear and damage from the kind of aggressive media encountered in oil and gas processing environments. Seats can be replaced in-situ, facilitating the low life-cycle cost goals of many modern process instrumentation designs.

Fabricated from 316 stainless steel as standard, HRPV Series valves can optionally be specified in a wide range of exotic alloys - including Titanium, Hastelloy, alloy 625, Duplex, Inconel and Monel - which offer proven properties to combat the corrosive effects of fluids such as sea water, bleaching agents, carbon dioxide and hydrogen sulphide. Fluids like these pose considerable problems in the offshore and onshore petrochemical industries, in many chemical processes, and in pulp and paper plants.

Further options include a choice of T-bar or hand-wheel handles, and an anti-tamper locking device to secure a valve's setting.