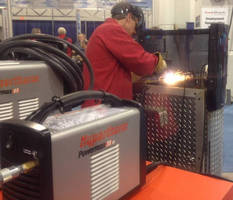 
HANOVER, N.H. – Hypertherm, a U.S. based manufacturer of plasma, laser, and waterjet cutting systems, today announced the launch of the Powermax30®  XP,  a new plasma cutting system that delivers high performance in a small portable package.

The new system is 50 percent more powerful than its predecessor, yet maintains the Powermax30’s light weight and small size. It features a two-in-one design for high power cutting on thick metal and detailed cutting on thin metal using FineCut® consumables. The recommended cut capacity is 3/8” (10mm) with a severance capacity of 5/8” (16mm).

The system, like all Powermax systems, is easy to use with simple controls. In addition, it is rugged and reliable with Hypertherm Certified™ reliability to perform in the most demanding environments. It is available from authorized Hypertherm partners around the world. To find a distributor near you, visit Where to Buy at www.hypertherm.com.

Hypertherm designs and manufactures advanced cutting products for use in a variety of industries such as shipbuilding, manufacturing, and automotive repair. Its product line includes plasma, fiber laser, and waterjet  cutting products, in addition to CNC motion and height controls and CAM nesting software. Hypertherm systems are trusted for performance and reliability that result in increased productivity and profitability for hundreds of thousands of businesses. The New Hampshire based company’s reputation for cutting innovation dates back more than 45 years, to 1968, with Hypertherm’s invention of water injection plasma cutting. The associate owned company, consistently named one of the best places to work in America, has more than 1,300 associates along with operations and partner representation worldwide.