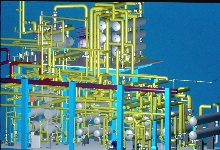 BOULDER, COLORADO-Vexcel Corporation today announced the release of the 5.2 version of its advanced close-range photogrammetry software. The FotoG (TM) 5.2 software is used to make measurements and create 3D CAD models of real world structures and objects from digital photos. Available in June, FotoG 5.2 brings two brand new features to the system - the capacity to automatically create 3D point clouds and 3D line sketches. Enhancements to the 5.2 version include improved model image overlay, automatic densify function and camera calibration. These additions and enhancements, which increase accuracy and decrease time needed for 3D structure modeling, establish FotoG as the leading software in the field of close-range photogrammetry.

According to Yvan J. Believear, et al, in a presentation at an International Society for Optical Engineering close-range photogrammetry conference: "Approximately 40 percent of all construction in the United States focuses on retrofitting existing facilities, and traditional survey mehods generally cost from 7 to 15 percent of the cost of the facility." Close range photogrammetry offers efficiency and safety benefits to many engineering disciplines and application areas including facilities management, automobile manufacturing, process engineering, shipbuilding, aerospace, and even entertainment special effects.

Vexcel's 3D point cloud feature of FotoG 5.2 represents one of the latest innovations in the field of photogrammetry. This feature turns the task of creating a CAD surface element from manually clicking points in digital images into a one-step process. By way of a one-button prompt, FotoG 5.2 creates a 3D representation of a given area using the point cloud data it automatically generates from digital photos. Not only does the point cloud feature reduce the time it takes to create the 3D image, it also creates a more accurate representation of complex curves such as the hull of a ship, the curved fender of an automobile or the fuselage of an airplane.

Another first-of-its-kind feature of FotoG 5.2 is its ability to create a 3D line sketch from digital photos. This automatic modeling ability detects 2D edge lines that appear in three or more photos, calculates the location of the cameras and projects the edges into a 3D space. This feature reduces modeling time by eliminating manual edge identification. The computer extracted edges provide increased accuracy because the computer can measure within 0.2 pixels compared to manual measurement which is, at best, +/- 1 pixel.

The improved model image overlay feature of FotoG 5.2 works in both MicroStation and AutoCAD applications. The new version takes the digital camera lens distortion into account thereby distinguishing if a difference between the CAD representation of an image and the camera representation is a result of a modeling difference or a lens distortion. Improvements made to the automatic densify function of FotoG include an automatic feature that finds circular and elliptical features that are common in three or more images. This increased number of automatically identified tie points increases the accuracy of measurements.

Camera calibration enhancements increase accuracy by better defining the distortion of a camera lens. The information increases precision in determining the 3D position of both the camera and the image.

Additional upgrades to FotoG 5.2 include an improved coordinate generation utility, a new tutorial and support for the latest digital cameras, including the new Kodak DCS760 line of 6 mega pixel cameras.