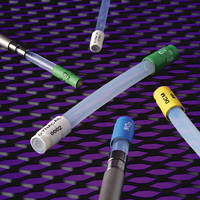 
VICI Metronics’ Dynacal® Permeation Tubes are small, inert capsules containing a pure chemical compound in a two phase equilibrium between its gas phase and its liquid or solid phase.  At a constant temperature, the device emits the compound through its permeable portion at a constant rate.  Accurate, stable concentrations range from PPB to high PPM. Due to our expertise with hazardous compounds, we are now able to offer Hydrogen Cyanide.

The purpose of a calibration gas standard is to establish a reference point for the verification of an analysis.  Permeation Tube rates can be certified using standards traceable to NIST by the most basic and accurate laboratory procedure – measuring the gravimetric weight loss over a known period of time at a known temperature.

Devices are typically inserted into a carrier flow to generate test atmospheres for calibrating gas analyzer systems, testing hazardous gas alarms, or conducting long-term studies of effects on materials or biological systems – in short, any situation requiring a stable concentration of a specific trace chemical.