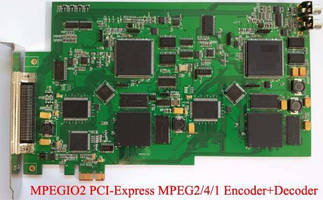 -- MPEGIO2 can stream MPEG video over any IP network, independent of video recording and video preview processes, i.e., MPEGIO2 can silently stream video without recording to file or previewing on PC screen. Both real-time encoded and decoded MPEG video can be streamed out. MPEGIO2 streams video in UDP protocol which can be received and played in real-time by software like VideoLan(vlc.exe) or hardware like Amino Set-top box etc.

-- Multi-Channel, Multi-Card support: each MPEGIO2 PCIe card has 2 identical channels functioning independently, max. 16 channels per PC are allowed: simultaneous multi-channel encoding/decoding/streaming/pause/resume/image-capture can be operated in any mixed mode. Channel addition/removal is handled automatically by the bundled application software on start up.

-- Multiple Video Input / Output: each MPEGIO2 channel has 3 RCA(Composite) and 1 SVideo input sockets and 2 RCA + 2 SVideo output sockets: simultaneous video input can be arranged as Picture-in-Picture, Picture-by-Picture on PC screen preview and inside encoded MPEG video, as well as directly on the video output sockets to be displayed on external TVs. Each channel can also pick up its companion channel's video to form a one-input, two-encoding scenario so that one input can be real-time recorded or streamed as 2 different format MPEG video. All Video I/O and Digital I/O sockets are provided through an external Breakout Box connected through a single cable to the PCIe card. Each MPEGIO2 channel has 4 Sub-Windows each can display video from a selectable video input source and can be arbitrarily arranged within video frame in any position and size, convenient common Sub-Window positions are provided in the application program and the SDK to instantly arrange Sub-Windows as equally split, full frame, picture-in-picture, picture-by-picture, etc.

-- Extensive input video configuration are provided: in addition to the usual colour brightness/contrast/hue/saturation/sharpness controls, MPEGIO2 also allows each video input to adjust AGC gain, cropping, White Peak Detection threshold etc. Each video input can be displayed inside one or more Sub Windows which have size and position in the entire video frame previewed and encoded: Sub Windows can have border, mirror/flip, zoom enabled, and can automatically display special colour or freeze last image when signal is lost.

-- PAL and NTSC input / output simultaneously supported and their conversion allowed: PAL-to-NTSC, NTSC-to-PAL input conversion is handled in real-time.MPEGIO2 can accept PAL video and encode them as NTSC MPEG or vice versa. it can also allow mixed PAL and NTSC video to appear in its different input sockets and displayed simultaneously on PC screen and output port, and encoded into one MPEG file. Input socket can also automatically detect and switch between PAL and NTSC signal change.

-- Live Video Preview on all incoming channels can be turned on or off any time independent of MPEG encoding and streaming: the live on-screen video preview for every channel is perfectly time-synchronized with their input signal, and the audio heard from the PC's speakers is always lip-sync'ed with the video. Full screen video display on any channel can be achieved by simple mouse clicking. Every channel can also show its operation status together with the video: recording, streaming, etc. through user-configurable preview text lines. Multiple channels can be flexibly arranged inside a resizable and moveable window with a user-definable channels-per-row parameter, e.g. with 4 channels available in a PC, they can be arranged as 2 X 2, 4 X 1, 1 X 4 etc. channels. A System Setup Dialog is provided for various video preview configuration. Using the SDK under Windows 7 or above, each MPEGIO2 channel can also live preview video in its own floating and resizable window, as demonstrated in the bundled C++.Net sample source code.

-- Still Image Capture on one or multiple channels can start at any time unrelated to video preview and MPEG encoding/decoding: full size 720X576 and 720X480-Pixel images in BMP, JPG, GIF/TGA and PNG format can be captured on either single channel or simultaneously on multiple channels.

-- Seamless Splitting Recording File allows continuous video to be recorded on multiple any-sized files for convenient DVD/CD disk burning. Not only recording can be split according to pre-defined file size or recording-time, MPEGIO2 also allows arbitrary file split live at recording time by a simple mouse clicking, and all the split files have perfect video/audio sync for consecutive DVD movie disk creation. The Seamless Split will not lose any video data: stitching the split files together will create a single MPEG file that is the same as a continuous recording without splitting.

-- Instant Pause and Resume recording (in the same MPEG file), timer and Scheduler recording, video-only recording, etc. are allowed in both the application software and supported by the SDK.

-- MPEGIO2 comes with a fully functioning Application software (with full source code) that provides an arbitrarily resizable and movable Video Preview Window with all channels' live video equally arranged or in full screen-mode, Multiple hardware and software configuration dialogs with a centralized Setup Menu, and a Drop-down Menu controlling all operations of any channel.

With a flexible and multi-functional design, MPEGIO2 can be used as hardware MPEG encoder and decoder, colour graphics/text on video overlayer, multi-I/O video multiplexer or de-multiplexer, PAL-and-NTSC signal converter, multi-pin Digital I/O controller, multi-channel video streaming server, or any combination or mixture of these functions, in video archiving, streaming, conversion, editing, monitoring, surveillance, real-time control and many other application fields.